The Dutch-Canadians Remember as One committee is a group located in Huron County, Ontario.  We are dedicated to make known to our fellow Canadians the extraordinary sacrifice made by Canada for the cause of freedom on the battlefields in Europe. Huron County gave up twenty of it's son's which we name and honour on this website.

In May 1945 Canadian soldiers of the 1st Canadian Army freed the Dutch people from the Nazis. Forever grateful, the Dutch celebrate Liberation Day with huge festivals each year. Canadian veterans and bands along with many Dutch families living in Canada travel to the Netherlands to participate in these festivals.

In Holland, Canada's name is associated with honour and freedom. Our military came and did what needed to be done, then restored political power back to the Dutch people. Canada then packed up and went home.  We asked for nothing in return.

Canadians who travel to the Netherlands discover that they are respected just because they are Canadian. Our unassuming manner has become part of our national identity. We are grateful the Netherlands has brought this character trait to our attention.

While the current generation of veterans continues to fade into history, the legacy of their achievement remains strong here at home. Huron County enjoys a continued connection as 10% of its population is of Dutch descent. The goodwill created by Canada's armed services during the Liberation of the Netherlands campaign was rewarded with post war immigrants who have worked hard and prospered here.

In 2015, co-chairs Sid Bruinsma and Jim Rutledge traveled to the Netherlands to be part of the 70th Liberation Day celebration. It was there that they discovered the enormous outpouring of goodwill that is extended to Canadians by the Dutch people. Huge crowds of people, young and old, turned out to welcome returning Canadian veterans, relatives and Canadian officials. The emotional impact was immediate.

Those of us who were born in Canada are aware of the bond that has existed between the Netherlands and Canada since 1945. We have heard about it and read about it and perhaps in a way we might understand what it is and what it means. However, until one actually goes to the Netherlands on May 4/5th of any year, to experience what the Dutch feel and how they express themselves no one will ever fully understand. It is an unusual and unique bond between two countries.

"Sid Brunisma and myself (Jim Rutledge) had the privilege of attending some of the ceremonies held throughout Holland in May of 2015.  In these pages, we would like to share some of the things we learned and experienced on the occasion of the 70th anniversary of the Dutch Liberation by the Canadian First Army."

Canadians of all walks of life who visit the Netherlands during May celebrations are treated as celebrities! The Netherlands keeps their wartime history alive by educating their youth, and encouraging pubic participation to recall the events of the German occupation of their country and the enormous cost of liberation. Freedom has a high price. Do we here in Canada continue to have the same deep appreciation of the sacrifice? Do we endanger our freedoms by neglecting to remember?

The 2015 experience inspired a plan to educate and remind Canadians here at home of the special relationship we have with the people of the Netherlands. The 'Dutch-Canadians Remember Committee" was formed to organize activities to reconnect with Canadians located inn southwestern Ontario.  Our committee worked with the Canadian and Netherland’s embassies to invite Princess Margriet to visit Huron County as Canada celebrated it's 150th anniversary of Confederation.

In 2017, we planned various events including a parade of dignitaries, bands, vintage Canadian Army vehicles, veterans and students. Our plan came together on May 14th, 2017 with the official visit of HRH Princess Margriet to Goderich. There she expressed her gratitude to the people of Canada and unveiled a plaque honouring members of the 1st Canadian Army who forced the German Army to surrender on May 5th, 1945.

Following this ceremony, she signed a scroll of remembrance which named each of the twenty Huron County fatalities from the campaign to liberate the Netherlands in 1944-45. This original piece of heraldic artwork is now displayed in a place of honour at Goderich Town Hall.

The band of the Royal Regiment of Canada as well as pipers of the 48th Highlanders performed a Liberation concert. A reception for the veterans, dignitaries and families of our "Huron 20" was provided to honour and remember our local fallen.

Our committee is working to reconnect Canada's war sacrifices with our younger generation. We are encouraging a new or deepened interest in the special bond of friendship that started in May 1945 and exists today between Canada and the Netherlands. 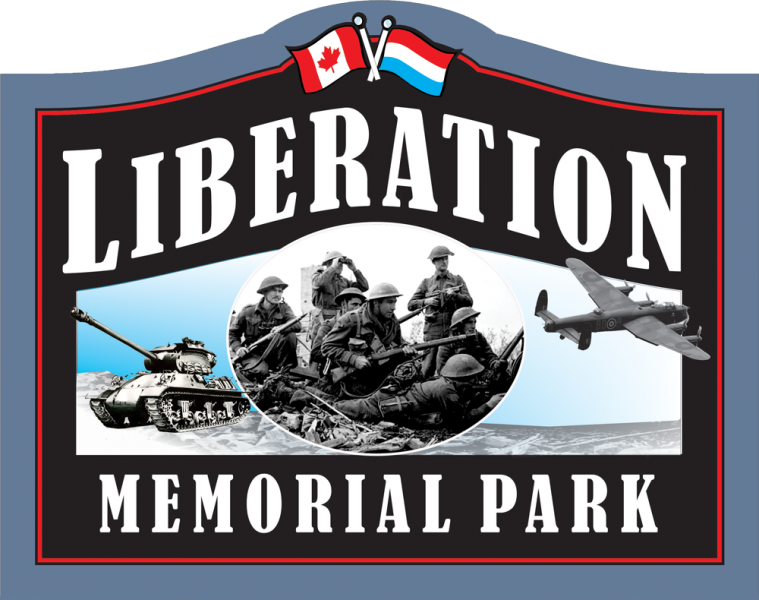 "It is the Veteran, not the reporter,
Who has given us freedom of the press."

"It is the Veteran, not the poet,
Who has given us freedom of speech."

"It is the Veteran, not the campus organizer,
Who has given us the freedom to assemble."

"It is the Veteran, not the lawyer,
Who has given us the right to a fair trial."

"It is the Veteran, not the politician,
Who has given us the right to vote.

Committee members, from left to right

Visit the Park in Goderich

The park has been a centre of celebration of freedom for Dutch-Canadian's in Huron County. This is where Princess Margriet of the Netherlands unveiled a plaque on May 14th, 2017, and signed a scroll of gratitude expressed for the Canadian sacrifice in the Liberation of the Netherlands. Twenty Huron County men gave their lives in the campaign to free the Netherlands. This website honours and remembers them as we celebrate the special bonds of friendship between our countries.

If you are visiting the Goderich area, check out what other events you can take in, by clicking here.

END_OF_DOCUMENT_TOKEN_TO_BE_REPLACED

Copyright © 2017 Dutch-Canadians Remember as One  All rights reserved.